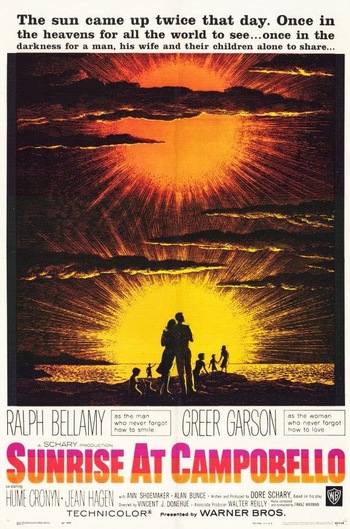 Sunrise at Campobello is a 1960 drama film directed by Vincent J. Donehue, starring Ralph Bellamy and Greer Garson. Adapted by producer Dore Schary from his own Tony Award-winning 1958 play, it is a Biopic of Franklin and Eleanor Roosevelt.

Specifically, the film deals with the years 1921–24, starting from when FDR was stricken with polio and paralyzed at the age of 39, and following the family as Franklin (Bellamy) deals with his illness. Franklin's political future is up in the air; as Eleanor (Garson) tries to support him, his loyal assistant and political advisor Louis Howe (Hume Cronyn) urges him to re-enter the political arena despite his handicap, and his domineering mother Sara (Ann Shoemaker) tries to get him to retire from public life and return to Hyde Park to be a country squire. Finally Roosevelt makes a triumphant return to politics when he delivers the nominating speech for Al Smith (Alan Bunce) at the 1924 Democratic National Convention.