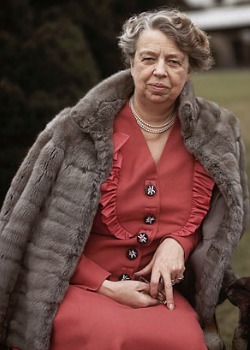 First Lady of the World!
Advertisement:

Years before Hillary Rodham Clinton, there was another First Lady who paved the way for women leaders in politics.

Born Anna Eleanor Roosevelt but always called by her middle name, she was the niece of the other Roosevelt to occupy the White House. Despite her famous name, her childhood was unhappy: her mother, the beautiful Anna, disliked her because of her plain looks, and her father, Elliott, was a mentally ill alcoholic and largely an absentee father. By the time Eleanor was ten, both of her parents were dead and she was being raised by her maternal grandmother. Perhaps the one person in Eleanor's childhood who doted on her was her uncle, Theodore - in fact, he walked her down the aisle at her wedding. Since FDR was also a relative of Teddy (they were fifth cousins), this technically means that he married his cousin. However, there was a little bit of distance between them, and this wasn't so uncommon back then. While she and Franklin were initially very close despite Eleanor's uneasiness in the roles of motherhood (her mother-in-law, Sarah, was her children's primary mother figure early on), eventually she discovered that he was cheating on her with another woman (who happened to be her former press secretary). Eleanor strongly considered divorcing him, but Franklin's mother convinced her to stay. After that, though, they never slept in the same bed again. While they weren't really in love with each other anymore, they were still close friends and working partners.

She may or may not have had other physical relationships herself. She ran in a social circle with many lesbian couples and had a lasting relationship with one such friend, journalist Lorena Hickok. Hickok even moved into the White House in an adjoining room to hers. They wrote over 4,000 letters to each other over the course of 30 years. Their letters are, at the very least, erotic but the exact nature of their relationship is unknown. The letters contain references to hugging and kissing but there’s no hard evidence it ever moved last anything beyond that. She had a similar lengthy but ambiguous relationship her male personal physician, Dr. David Gurewitsch.

After Franklin lost the use of his legs to polio in 1921, Eleanor slowly started to become his eyes and ears. She would travel to make speeches in support of her husband. Widely popular, many credit her with helping him win many votes. Just before the 1932 election, after the notorious Bonus Army incident of the Herbert Hoover presidency, Eleanor went to visit the veterans and give them aid, leading many to comment "Hoover sent the Army, Roosevelt sent his wife." After this, Franklin easily won by a landslide. She played a major role in her husband's administration, and she was the first woman to play a major role in politics out in the open. (Presidents have been turning to their wives for political advice ever since John Adams consulted with his wife Abigail, but of course that was always private; Woodrow Wilson's wife took over after he had a severe stroke, but this was kept secret at the time.) As a teenager, she had studied in London under the renowned feminist French educator Marie Souvestre and received an education which instilled in her a progressive world view and sense of social justice. This would serve her well as she traveled around the country (and the world) bringing attention to many issues and supporting many causes, including an end to child labor, the creation of welfare, better conditions for workers, an end to racial and sexual discrimination, and minimum wage. Like her husband, she used the media to great effect in building support for the administration's policies. She had a daily newspaper column, My Day, which she worked on until her death. During World War II, she flew to Allied countries and to military camps to help the war effort. Eleanor Roosevelt forever changed the role women can play in American politics, which is remarkable considering that she was actually never even elected to anything.

Her best moment was what she did for Marian Anderson, a black opera singer. When the Daughters of the American Revolution, of which Eleanor was a member, denied Anderson the right to sing in Constitution Hall, Eleanor arranged for Anderson to sing on the steps of the Lincoln Memorial. She also resigned from the group. During the war, she also made sure that the Tuskegee Airmen, a group of black combat pilots, became the first black men to ever see air combat when many people in the Army tried to put an end to the group before it began.

She continued to be a major figure in the years after Franklin's death, too. Harry Truman appointed her to the United Nations General Assembly as one of the delegates from the United States. There, she was the first chairperson of the United Nations Commission on Human Rights and the primary author of the Universal Declaration of Human Rights. Eleanor was so influential that Truman seriously considered asking her to be his running mate in the 1948 election. Years later, John F. Kennedy had her as chairperson to the Presidential Commission on the Status of Women, which led to him signing a law banning pay discrimination towards women. When she died in 1962, the public mourning was internationally widespread. Such is the continued affection for her that the bronze sculpture of her in Washington, DC, doesn't have a patina on its hands because visitors keep touching them in remembrance.