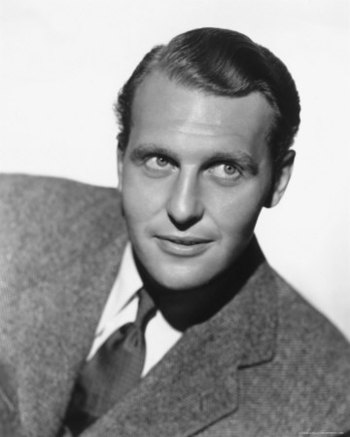 Ralph Rexford Bellamy (June 17, 1904 – November 29, 1991) was an award-winning American actor of stage and screen who appeared in a variety of leading and supporting roles over a sixty-year career. Bellamy was nominated for an Academy Award for his supporting role in The Awful Truth; though he didn't win, he was later given an Honorary Oscar, probably for always being relegated to Romantic False Lead in almost all his comedic roles of the 30s.

As a teenager, Bellamy ran away from home to join a road show and became a touring performer, which travelled from his native Chicago to New York City. He started his stage acting there and soon owned a theater company, but then began to appear in movies. By 1933, he'd been in over 20 films and kept up the pace as he soldiered through the decade, usually playing the Nice Guy who doesn't get the girl (he reportedly joked that his motto was "If I can't get the girl, at least give me more money").

In the 1940s, tired of being typecast in films, he went back to the stage, where he became a Broadway star playing the lead roles in such plays as Detective Story. He would also appear on television once it became popular. One of his more notable later roles was Franklin D. Roosevelt, whom he portrayed in both the stage and movie versions of Sunrise at Campobello, and then again much later in the 1983 miniseries The Winds of War. An even bigger role came with the comedy Trading Places, in which he played the nefarious Randolph Duke (and which also happened to be Bellamy's 99th film).

Bellamy died from a lung ailment at 87 years.