Film / Footsteps in the Dark 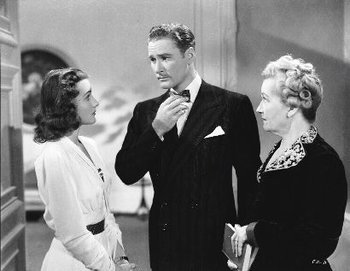 Footsteps in the Dark is a 1941 mystery film directed by Lloyd Bacon, starring Errol Flynn.

Francis Warren (Flynn) is a financial advisor who handles the investment portfolios and tax shelters of New York's wealthy. He lives in a mansion with his gorgeous wife Rita (Brenda Marshall) and surprisingly tolerable mother-in-law Agatha. What Rita and Agatha don't know is that Francis has a secret life: he writes detective fiction under the pen name of "F.X. Pettijohn". What's more, his latest novel Footsteps in the Dark includes thinly veiled caricatures of many members of the Long Island smart set that Francis socializes with. Agatha is talking about a libel suit, if only they can figure out who F.X. Pettijohn really is.

But that's not all! Francis also is an amateur sleuth! He tags along with the police—who know him as F.X. Pettijohn—to crime scenes, ostensibly to do research but really to investigate their cases for them Jessica Fletcher-style, much to the irritation of Police Inspector Mason (Alan Hale). All this he does without Rita knowing, going so far as to sneak in through second-floor windows of his house late at night so she doesn't hear him come in.

A man named Leopold Fissue comes to see Francis during Francis's day job as a financial advisor. The obviously shifty Fissue wants Francis's help in liquidating some uncut diamonds. Francis is suspicious, and when Fissue turns up dead on his yacht Francis is really suspicious. The police write Fissue's death off as a heart attack, but Francis doesn't buy it, and he follows the clues to a burlesque dancer named Blondie White who Fissue was dating.

A rare comedy for Errol Flynn, who spent most of his time at Warner Bros. in action, cowboy, or war movies. Ralph Bellamy appears as Dr. R.L. Davis, a dentist who knows more than he's telling.