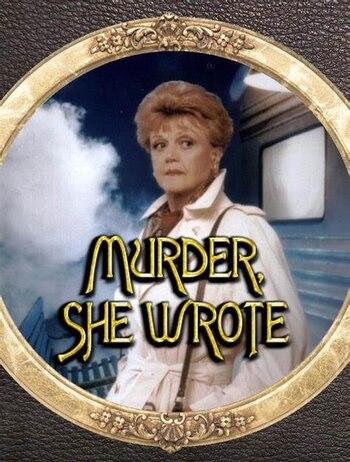 "You ask a lot of questions."
"I'm nosy."
Advertisement:

Murder, She Wrote is a popular, long-running television mystery series created by Peter S. Fischer and the team of Levinson and Link, starring Angela Lansbury as mystery writer and amateur detective Jessica Fletcher, who lives in the fictional town of Cabot Cove, Maine. The series aired for 12 seasons on CBS, from 1984 to 1996.

Ruthlessly formulaic, most of the show's episodes follow a standard format: a murder is discovered, Jessica starts snooping around, the police tell her to let professionals handle things, she ignores them, then deduces the murderer's identity in a "Eureka!" Moment, and finally engineers a public confession, frequently by tricking the murderer into a Just Between You and Me. And then everybody laughs. Later seasons did mess with the formula a bit, changing the mysteries from Christie-style whodunnits to Columbo-style howcatchums. All three of the show's creators were tied to Columbo.

The series was followed by a series of four made-for-TV films, aired from 1997 to 2003, and also led to a short-lived Spin-Off, The Law and Harry McGraw. Angela Lansbury has said she'd like to take one more swing at Jessica Fletcher, but no one else has shown interest. Additionally, rumors began in late 2013 that a possible reboot was in the works, with Oscar-winner Octavia Spencer as a "hospital administrator and amateur sleuth who self-publishes her first mystery novel." After a lukewarm reception from fans and Lansbury herself, the idea was shelved.

An amusing interpretation, lampshaded in the show, no less, is that there is no better explanation for the sheer number of murders the lead character encounters throughout the long run of the series than her involvement in all of them. Indeed, if Cabot Cove alone were really to have suffered that many murders, it would top the FBI national crime statistics by several orders of magnitude. Not only does this one town see more homicides in a year than the entire state of Maine sees in real life, but the town has an estimated murder rate eighty-six times higher than the most murderous city in the real world, Caracas, Venezuela. Also, if you're Jessica Fletcher's friend in any capacity but not an episode regular, you're pretty much doomed either to kill someone or be killed, or be wrongly arrested for being a killer.

Advertisement:
“What is this, the death capital of Maine?! On a per capita basis this place makes the South Bronx look like Sunnybrook Farm!” — new Sheriff Mort Metzger on Cabot Cove.

In an interesting cross-media spin-off, Donald Bain wrote several mystery novels inspired by the series, all of which credited Lansbury's character Jessica Fletcher as a co-writer. The series continued after his death, with Jon Land completing Bain's last work (book #47) and then taking over as main writer (with Bain's grandson as a consultant) for books 48 to 52. As of July 2020, Terrie Farley Moran has been announced as succeeding Land as the main author, from books 53 on.

Now has a character sheet. Feel free to contribute.

The series in general contains examples of: