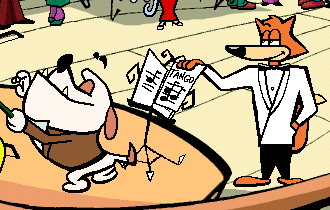 Swapping sheet music is a common variant.
"Okay. The game is Cue Card Rummy. I deal."
— Garfield, preparing to invoke this trope in Garfield and Friends (episode: Health Feud)
Advertisement:

A Script Swap occurs when, either by accident or by external mischief, someone winds up reading or following a different document than what they're supposed to, and does so without at any point noticing the mixup.

Setting one of these up is a common Adventure Game-exclusive Stock Puzzle. The structure is simple: you've got a character in the middle of reading a speech/playing a song/giving someone instructions. Your life would be a whole lot easier if that speech/song/set of instructions was different. So you inform the character of the three-headed monkey sneaking up behind them, then swap their speech/lyrics sheet/instructions booklet with another one you acquired by irrelevant means.

A common trick to pull on the Cartoon Conductor. See also Oh Wait, This Is My Grocery List. The cases in which it happens by accident rather than deliberate trickery also fall under Unfortunate Item Swap. Compare the Bavarian Fire Drill.

Living in a garbage heap means you might end up reading off the wrong Evil Plan.

Living in a garbage heap means you might end up reading off the wrong Evil Plan.