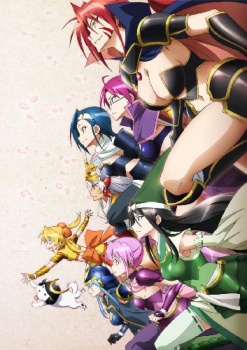 Ordinary High-School Student Hideyoshi (real name: Yoshino Hidenote East Asian order: Hide Yoshino) can't do anything right. She's a trouble magnet who is in danger of failing, and with a test on the Sengoku period coming up, her future isn't looking bright. One night, she stops by a shrine and finds herself, through a series of accidents, being transported back to the actual Sengoku period. Only most of the major historical figures are now women, and Hideyoshi has no idea what to do or how to get home, so all she can do is help Nobunaga obtain the pieces of the Crimson Armor so she can take over Japan.

Originally a pachinko game, Battle Girls - Time Paradox was adapted into an anime of the same name in the spring of 2011.