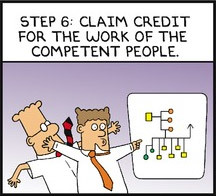 Image drawn by Another Duck.
Grand Moff Tarkin: I will tell [the Emperor], that I will be taking control over the weapon I first spoke of years ago, effective immediately.
Director Orson Krennic: We stand here amidst MY ACHIEVEMENT! NOT YOURS!
— Rogue One
Advertisement:

Some people want glory and fame... but they can't be bothered with all of that "hard work" stuff. Or perhaps they don't really have any talent or skill to recommend them in the first place.

Their solution? Lay claim to someone else's achievement.

Stealing the credit usually manifests itself in one of two forms. The first is a character who is a schemer. They're smart enough to know that they don't have much talent of their own...and smart enough to identify, manipulate and cheat someone who does. They usually lay their plans very carefully, encouraging their target, supporting them, and lending them a shoulder to cry on. They may even provide the funding for a project — as a backup plan, so that they can claim that as the "owner" of the project, they were due the credit. When it's complete, the thief will immediately alert the media to their magnificent discovery, claiming all of the money and acclaim in the process and making sure that the creator's name never appears in the history books. They will have some kind of plan in place to shield them from discovery, and are therefore very difficult to punish. Worse, the person they manipulate is often vulnerable or overly trusting, so this character gets serious Kick the Dog points.

The second type is an opportunist. They happen to be in the right place at the right time. Perhaps the manager wanders by when the CEO is chatting to a lowly secretary, only for said lowly secretary to outline a brilliant new advertising campaign. The manager will swoop in, blithely remark on how he was chatting to the secretary about his new advertising concept just the other day, and shoo her out of the way so that he can bask in the glory. This type of opportunist is more common than their scheming counterpart — and much less clever. They are usually caught out in their lie and have no contingency plan.

Some examples of this trope see the thief laying claim to something that they were never a part of at all (such as claiming the credit for a painting when they've never even seen a paintbrush). Others will be involved with the project in some capacity...but they either had a much smaller part to play than they claim, or appear only at the end stages of a project, claiming it was their idea all along. Even if they had previously dismissed the idea as nonsense.

However, some characters will actively allow or even insist that someone else steals the credit from them. The "thief" in this case is usually more sympathetic, since they are often oblivious to the scheme or reluctant to take part. This usually occurs when the true creator feels that claiming the credit would be a hindrance: perhaps they're a doctor who's quite happy to develop life-saving treatments, but feels that fame would hamper his work, or a reclusive author who loves her work, but uses someone else to attend all the book signings and conventions. Rarer is the purely altruistic version, where the creator feels someone needs the recognition or fame more than they do.

The Pointy-Haired Boss will often be involved in the opportunistic version of this trope, while The Chessmaster and the Manipulative Bastard will be responsible for the scheming variant. Behind Every Great Man often sees the woman of the duo allowing him to take the credit for her achievements as part of her role, with some women encouraging said man to do this so that she can continue working in peace. Glad I Thought of It is a more low key variation of the trope, with the thief stealing an idea rather than something more substantial.

Sister Trope to Plagiarism, which is specifically about failing to give due credit for someone else's literary or artistic work. Ghostwriter is for when permission is given (well, sold) to take credit, instead of being underhanded about it.

Behold! I made this entire page myself. Isn't it wonderful?

Action Hero Dexter explains how Mandark was once a frustrated research scientist who began stealing his ideas, leading to him becoming Dexter's boss, before somehow getting his hands on the Neurotomic Protocore (which Number 12 realizes how), and in an attempt to utilize it, accidentally set its positive flow to negative, with the negative neurotomic energy twisting Mandark more than ever and numbing the minds of everyone in the world (except Dexter) allowing Mandark to become the science-forbidden, knowledge hoarding overlord of the world.

Example of:
From Nobody to Nightmare

Action Hero Dexter explains how Mandark was once a frustrated research scientist who began stealing his ideas, leading to him becoming Dexter's boss, before somehow getting his hands on the Neurotomic Protocore (which Number 12 realizes how), and in an attempt to utilize it, accidentally set its positive flow to negative, with the negative neurotomic energy twisting Mandark more than ever and numbing the minds of everyone in the world (except Dexter) allowing Mandark to become the science-forbidden, knowledge hoarding overlord of the world.