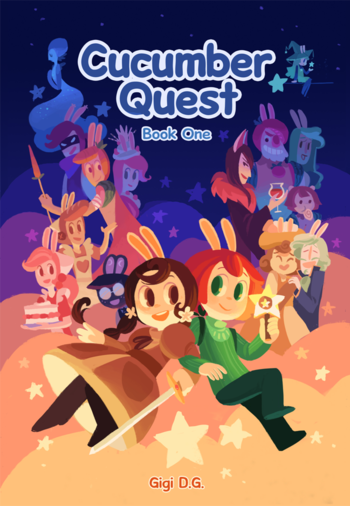 Tomorrow's the first day of school at Puffington's Academy for the Magically Gifted and/or Incredibly Wealthy, and Cucumber's all packed up to move in. Before he can tuck into his last dinner at home, a letter arrives: Cucumber's father, Lord Cabbage, has been kidnapped and imprisoned by the henchmen of the evil Queen Cordelia, who plans to Take Over the World! Despite being meek and studious and having a little sister who probably would do a better job, saving the world is strictly the duty of Cucumber. Cucumber sneaks into the Caketown Castle dungeons to speak with his father, who tells him Cordelia's plan: to amass the Disaster Stones and awaken the Nightmare Knight! Cabbage tells Cucumber to meet with the Dream Oracle, who will grant him the legendary Dream Sword, an invaluable weapon against the Nightmare Knight.

And so begins Cucumber's quest.

Cucumber Quest is a webcomic by Gigi D.G. of Hiimdaisy fame, and reads like a snarky love-letter to classic SNES-era video games, presented with a Paper Mario-style sense of humor. It can be read here.

Has a slowly filling character sheet. Put character-specific tropes there.

The comic has spawned some detailed Fan Work, among them a (now discontinued) fan dub

made by the same people who made Welcome to... and So This Is Basically... and complete with soundtrack

(made by the same person behind the Ruby Quest album), a fan game

in the style of Ace Attorney, and a Spanish translation

a significant revamping of the comic's format, stating that due to a myriad of factors in their personal life, they no longer have the time or energy to continue the comic in its original form. Consequently, following a lengthy hiatus, the remainder of the comic's story will appear in the form of an illustrated script.