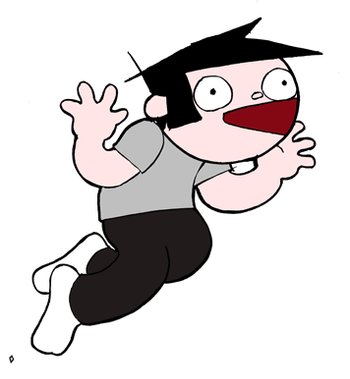 is a Webcomic by Jason Shiga, author of Fleep.

It begins simply enough. Jimmy Yee has lost everything, botched his attempt to get payback, and just wants to end it all.

There's just one small problem: he can't quite seem to stay dead.

In fact, dying just seems to put him in one strange situation after another, until he finally comes to the realization that he is a demon - a being who can possess others simply by dying near them. And it's not long before he finds himself chased by shady government agents who would like nothing more than to use his powers to further their own agenda.

With his sharp wits and lack of moral compass, Jimmy Yee has no limits... He does not. And there is nothing he cannot - will not - do to achieve his goals...