Webcomic / Diary of a Wimpy Kid 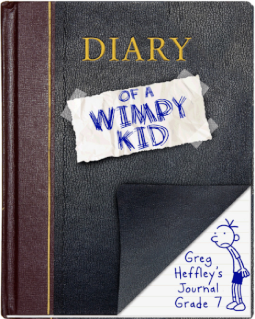 Diary of a Wimpy Kid

is a 2004 Slice of Life webcomic written by Jeff Kinney that was hosted on the children's website FunBrain.

It's about 12-year old Greg Heffley, who receives a diary (which he insists on calling a journal) from his mother, much to his chagrin. Greg's mom strikes a deal with him and tells him if he writes a little each day in his diary, he will get to opt out on one chore on Saturdays. Greg agrees to this, but it's mostly because he hopes it will be useful when he becomes famous and doesn't want to answer annoying questions. He then chronicles all of his misadventures during the start of the school year all the way into summer vacation.

In 2007, Kinney published the first novel, which is a condensed version of the original webcomic (which is the least they could do, since the original webcomic was finally taken off the website and is currently unavailable). The novel quickly became a bestseller, spawning several books and later on, a series of films.

Diary of a Wimpy Kid contains the following tropes: