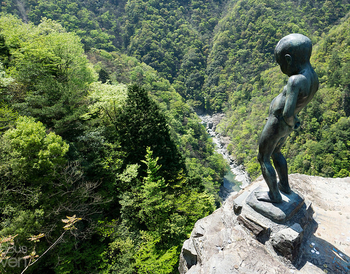 Tommy: Why don't you just go on the tree?
Chuckie: Once you're potty-trained, you can't go back to stuff like that!
Tommy: Why not? Spikenote A dog does it all the time.
Chuckie: Oh, all right! I'll use the tree, but you guys got to not look at me, okay?
— Rugrats, "Potty-Training Spike"
Advertisement:

Potty Failure is when a character who has to go to the bathroom ends up wetting or messing themselves. This (also known as "making wet leaves") is when a character deliberately relieves themselves outdoors because they enjoy it or have no choice. Sometimes happens during the Camping Episode. If it's in the water, that's Putting the Pee in Pool. Characters trapped in a Potty Emergency might do this or try to do this. Do not add an example if an animal that is not a (more anthropomorphic leaning) Funny Animal or Beast Man does this, as for them, peeing outside is the norm. Often if someone pees on a plant, the pee-er or someone else will make a joke about "watering" the plant.

Note: Pooping outside counts, but it's a rarer variation.

Compare Putting the Pee in Pool for when it's in the water, Jar Potty for when it's in an object, Embarrassing Damp Sheets for using a bed as a toilet, All-Natural Fire Extinguisher for using urine to put out a fire, Potty Emergency, Potty Failure, Urine Trouble, Toilet Humor and Yellow Snow. Sometimes, the Nature Tinkler might have to use a Toilet Paper Substitute.

Fridge pees in an ice cave.

Fridge pees in an ice cave.