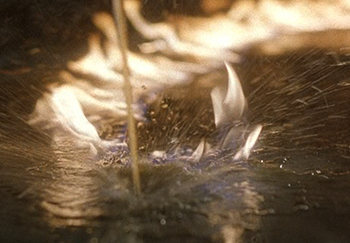 "Today, East Gackle's own Andy Larkin is being hailed as a local hero for helping extinguish a fire that engulfed our mall's main escalator. Andy used... uh, natural means to help the fire department out. Way to 'go', Andy!"
— What's with Andy?, "Busting"
Advertisement:

There's a fire burning and no way to put it out. There's no hoses or water sources nearby, the sinks aren't running, or any fire extinguishers in the immediate vicinity that could possibly put them out.

Luckily The Hero has to pee. Might as well put it to good use.

A type of Toilet Humour. This is often a conveniently-timed solution to a Potty Emergency. Fire needs to go out, protagonist needs relief, kills two birds with one stone, really. Can be a subtrope of Nature Tinkling. Oftentimes, a giant can be trusted to put out the fire this way. If an animal does it, it'll fall under Urine Trouble. Sub-trope of Revolting Rescue.

Do Not Try This at Home, as urinating on a fire will not be enough to put it out in real life note  Also, phosphorous compounds (like ones urine contains) smell bloomin' awful when heated. Fair warning.. Even in fiction, fire won't always be extinguished by urine if this trope is attempted.

The four boys (and Butters) send Trent to juvenile hall for five years by refusing to tell the police what happened.

Example of:
Create Your Own Villain

The four boys (and Butters) send Trent to juvenile hall for five years by refusing to tell the police what happened.