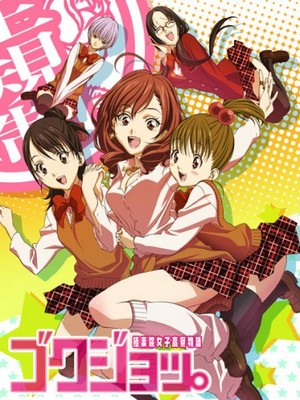 Gokujo. ~Gokurakuin Joshikou Ryou Monogatari~ (also known as Gokujyo., lit. Extreme Woman. The Tales of Gokurakuin Girls School Dorm) is an ecchi/yuri manga by Maya Miyazaki. It was adapted into a 12-Episode Anime that aired in the Winter 2012 Anime season.

Kuribayashi Minami returns to Japan after a long stay in Los Angeles. She enters an upper-class girls' high school, "Gokurakuin Jyoshi High School", or "Gokujyo" for short. She tries to dominate the school with her beauty, but her plan is spoiled by the silly and perverted behaviors of her eccentric classmates.

Needs a Better Description. Page in construction, any help is appreciated. Not to be confused with Gokujou Drops.