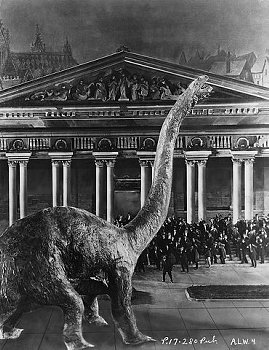 "My brontosaurus has escaped. Keep off the streets until I recapture it." - Professor Challenger
Advertisement:

The Lost World is a 1925 silent film directed by Harry O. Hoyt. It is an adaptation of Arthur Conan Doyle's 1912 book of the same name.

The movie was produced by First National Pictures, a large Hollywood studio at the time,note They eventually merged with Warner Bros. and stars Wallace Beery as Professor Challenger. This version was directed by Harry O. Hoyt and featured pioneering stop motion special effects by Willis O'Brien (an invaluable warm up for his work on the original King Kong (1933) directed by Merian C. Cooper and Ernest B. Schoedsack). Writer Doyle appears in a frontispiece to the film. In 1998, the film was deemed "culturally, historically or aesthetically significant" by the Library of Congress and selected for preservation in the United States National Film Registry, and can be seen here

Every movie featuring dinosaurs, from the Godzilla movies to Jurassic Park owes a nod to this film, as it was the Trope Codifier for dinosaurs as movie monsters. Even King Kong (1933) can be seen as a remake of The Lost World with a giant ape instead of a brontosaurus.

Not to be confused with the 1997 movie The Lost World: Jurassic Park, which borrows quite a few plot points of The Lost World nonetheless.