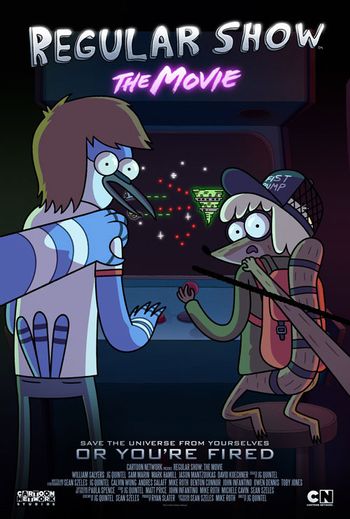 You wanna help save the universe?
The universe is on the verge of being destroyed.
Years, whole decades, gone in an instant.
Until nothing is left.
Advertisement:

Regular Show: The Movie is a TV film based on the animated Cartoon Network series Regular Show, released in November 2015. It's a Big Damn Movie based around the park workers in a Race Against the Clock after Mordecai and Rigby accidentally create a "timenado". What's on the line? The whole universe, as well as Earth's history...and potentially Mordecai and Rigby's friendship.

Ideas for a Regular Show film were reportedly first conceived in 2013, with the film beginning production the following year. It was officially announced during Cartoon Network's 2015-16 upfront slate

. In June 2015, Quintel sent out another tweet stating that the film was finished

You can watch the trailer here.

On September 1st, 2015, the entire movie was released digitally on iTunes. A home video release followed on October 13, 2015, before having its television premiere on November 25, 2015.