Future Me Scares Me 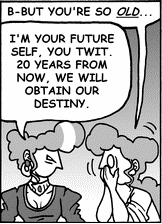 So you're a travelin' in time, as you do, when suddenly! Ooh, it's future you! Only... you're different. And not in a good way. If you were cool, maybe The Hero (or the Alpha Bitch/Jerk Jock), then you discover you've become really lame. Conversely, if you're the Plucky Comic Relief or someone similar, older you is a badass... a scary badass. Or worse, your future self could be evil. Milder versions simply result in a personality change that bugs you.

Alternatively, you're the same as ever, and boy, can meeting yourself make you see why others are annoyed by you. Maybe it's not you that bugs you so much as your change in social standing. This may lead to you arguing with yourself.

Moral of the story? If you're a time traveller, never meet up with yourself. (And were you always that fat?)

Commonly used in concert with Bad Future Ominous Message from the Future. See also Mirror Universe, Evil Me Scares Me, Future Badass, Future Loser, Future Self Reveal. Compare Amnesiac Dissonance, Other Me Annoys Me, I Hate Past Me (where your own past shocks you).