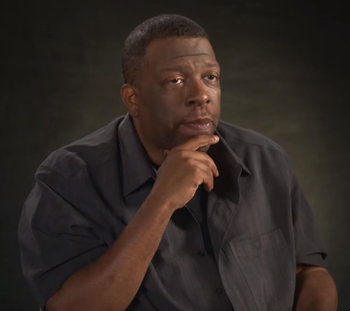 Christopher James Priest (born James Christopher Owsley, June 30, 1961), is a comic book writer. He's famous mostly for things that have very little to do with his comics (namely, his race and various inter-office pissing contests), which is a shame, because as far as the people who read his work are concerned, he may be one of the very best the industry has ever seen.

He first came to fame as a writer and editor on Spider-Man, a position he took at the age of 22 and according to him, was something that in retrospect should never have been given to him. He often clashed with regular writers like Tom Defalco and others but Peter David credits him for taking chances and encouraging more realistic stories, such as "The Death of Jean Dewolff". Priest also wrote the famous Spider-Man vs. Wolverine #1 one-shot which among things is known for featuring, controversially, a scene where Spider-Man accidentally kills someone, as well as for being the first time that the caption at the end of Amazing Fantasy #15 was mainlined into the pages, when Peter says that his Uncle told him "With Great Power Comes Great Responsibility", which subsequently has become a permanent part of Spidey's mythos.

His most famous works are Quantum and Woody (about two dysfunctional best friends turned superheroes), Power Man And Iron Fist (about two dysfunctional superheroes turned best friends), The Ray (which was Invincible ten years before Invincible, only with lots more Time Travel and Gambitting), and perhaps most famously, his Black Panther relaunch, considered by many (if not most) fans to be the definitive take on Panther, and is largely credited with legitimizing the character beyond being "that black guy in the back of the Avengers team photos".

He also worked on Deadpool, Steel, Justice League Task Force, other books in the '90s Valiant universe (particularly Solar and the aforementioned Quantum and Woody), and other, less popular/successful characters and teams (including his doomed-from-the-starting-gate epic, The Crew.) He never really got a crack at writing Batman, Superman, or any other A-list character. Reports of how bitter (or not) he was over this vary. While a lot of his fans like to claim racism is responsible, Priest himself has always taken the high road, focusing more on just exactly how difficult it is to truly break through in the industry, particularly if your first or second project isn't an enormous success, and the tendency of DC and Marvel to give their flagship books to flagship talent.

In a neat bit of irony, when he returned to comics in 2016 to write Deathstroke (Rebirth), he was a flagship talent, even garnering an Eisner nomination. As a result, in 2017 DC made him the main writer for Justice League until the Justice League: No Justice anyway.

He's been a notorious victim and/or perpetrator of Executive Meddling.

The absolute king of the Beat Panel.

His more recent works include Deathstroke and Justice League for DC Rebirth, as well as Inhumans: Once and Future Kings for Marvel. Currently, he's writing a run on Vampirella and a five-issue U.S. Agent mini-series.