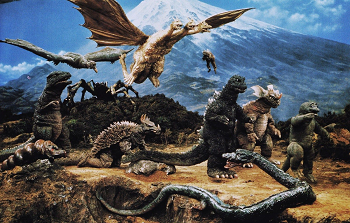 A deserted island which is not-so deserted. Somewhere on the island is a horrific giant beast. The telltale signs that it's there are usually giant footprints in the sand along the beach, the rumbling of footsteps or the clattering of trees being knocked down, and of course, a horrifying roar.

Usually, these types of creatures are the island's dominant species or ruler, lording over the place because they are the biggest and strongest. In some cases though, they are guardians protecting something residing on the island. Of course, there's also the possibility that the creature is trapped on the island, being surrounded by water on all sides makes it a good prison, in the event the creature cannot swim or is weak against water.

The type of creature that is usually the island's inhabitant can range from creatures from prehistoric times to everyday animals of the giant variety, especially crabs, spiders, and insects. Eldritch or Animalistic Abominations are not excluded from this. In some cases, the island can even be a domain of Mechanical Monsters. Of course, the visitor of the island might not even see what the beast is, due to perhaps being an Invisible Monster or perhaps just to invoke Nothing Is Scarier.

Can be an Island of Mystery if those that land are unaware of the creature residing on it at first. Usually used in a Trapped-with-Monster Plot, especially if the island's visitors are marooned. Different from Turtle Island, which is where an island is a creature, although it is not impossible that the moving island has a beast imprisoned on it. Similar to Beast in the Maze where a creature resides in a labyrinth instead of an island. If there is more than just one giant beast on the island, a Behemoth Battle is likely to happen between them. If the creature has a large stash of treasure, that is a Dragon Hoard. For a wider variety of monster dwellings, see Home of Monsters. Usually a kind of Lost World.

President Lisa Simpson is sent to Monster Island for failing gym. But don't worry, it's just a name.

President Lisa Simpson is sent to Monster Island for failing gym. But don't worry, it's just a name.