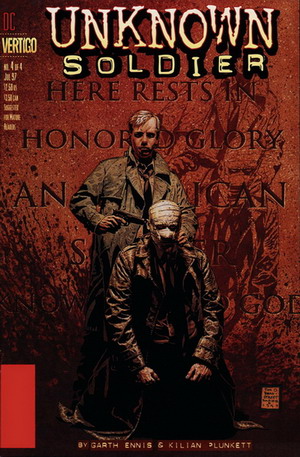 "One guy can affect the outcome of a whole war! One guy in the right place... at the right time..."
— Harry, brother of the Unknown Soldier
Advertisement:

in the world. Originally a World War II hero, the character debuted in Our Army at War #168 (June, 1966), featuring Sgt. Rock. Figuring the character to be interesting enough, DC featured him in Star Spangled War Stories starting from issue #151 (June-July, 1970). Once the character had begun featuring exclusively in the comic, it was later renamed to Unknown Soldier and continued for 64 more issues, ending in October, 1982. The character has also made appearances in more modern DC Universe titles.

Since then, there have been a few more limited series and minis, including one in 1988 by Jim Owsley (aka Christopher Priest) and Phil Gascoine, which was popular with fans, though the characterization differed and may not actually be about the same character who fought in WWII. In 1997, a mini written by Garth Ennis and illustrated by Kilian Plunkett was released and portrayed a Darker and Edgier version of the character. It was released by Vertigo Comics and focused on a CIA agent trying to uncover the details about the Unknown Soldier.

In 2008, another series titled Unknown Soldier was released by Vertigo Comics. It features another character taking up the mantle of the Unknown Soldier. It was written by Joshua Dysart, with Alberto Ponticelli as artist. It was nominated for an Eisner Award in 2009 for Best New Series. Unlike his predecessor, the character has a known real name, Dr. Moses Lwanga. The series features a hero from Uganda who moved to the States with his family when he was young, before eventually returning to help the people of his land.

In 2012, G.I. Combat vol 3 introduced the New 52 version of the Unknown Soldier in a back up strip written by Jimmy Palmiotti and Justin Gray with art by Dan Panosian. This version is initially introduced as an anonymous US soldier in present-day Afghanistan, before revealing that there are Unknown Soldiers dating back to Ancient Rome. Following the cancellation of G.I. Combat, the Soldier joined the Suicide Squad.

Not to be confused with the Finnish war novel The Unknown Soldier or the films based on it.