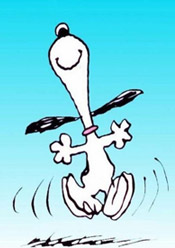 SUPPERTIME!
"Scuse me while I do my happy dance!"
— Oghren, Dragon Age: Origins
Advertisement:

This trope is a dance that a character does when they're happy. Maybe it's time to celebrate. Maybe it's time to make themselves feel better. Maybe their excitement overflows into action. Maybe they want to pat themselves on the back. Whatever the reason may be, they quickly bust a couple of moves. The Happy Dance! It's also known as a victory dance.

May even be a signature moment for the character (for example, this picture may seem awfully familiar). See also Victory Pose.