Strangled by the Red String 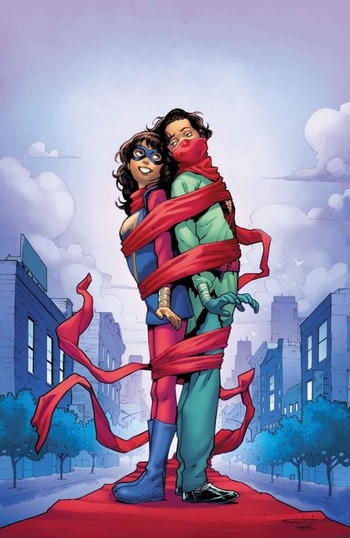 Taking it a bit literally, guys.
Liu Kang: My heart belongs to another.
The Nostalgia Critic: Your heart belongs to another? Who? Kitana? That chick you've known for less than an hour? How does she own your heart? True, you just met this other woman, but give her a few minutes and you'll have known her just as long.
— The Nostalgia Critic reviewing Mortal Kombat: Annihilation
Advertisement:

Deus ex Machina as the flop of a Romance Arc. "Amor ex Machina," if you will.

Not every Romance Arc gets the luxury of being played out fully to the last detail. Sometimes the writers decide that the important part is getting those two characters in a relationship, and the rest will somehow sort itself out. The result is that the two characters go through a leap of characterization all the way to a Relationship Upgrade without any of the usual in-betweens; apparently Cupid forgot to tie the Red String of Fate on the lovers' pinkies at birth, and in a desperate attempt to save face he ended up garroting them with it in a back alley while he thought the audience wasn't paying attention.

Possibly the two characters have had little to no interaction prior to their sudden onset of romantic involvement, or they had, and even plenty, but it was never romantic in nature, and seems to have spontaneously transformed into such without any apparent reason. In more borderline cases, this can happen even when the two characters have shown interest in each other, in some form or another; it's the placement, pacing, and timing that are off. An audience tends to know the kind of emotional process a person goes through when entering a romantic relationship, and will not be happy past a certain line of too little of this process and too much conveniently dramatic payoff.

Remember, Tropes Are Tools: By itself, a relationship that doesn't get painstakingly detailed development is not automatically bad, and like any other plot development, there are cases where it just needs to be done with and make place for more important things. Sadly, the case is often the opposite — the romance is the important thing, and, in spite of that, the author just didn't figure the "how it comes to happen" part was very important. The subsequent lack of "volume" in the Romance Arc, in turn, begs for compensation: having characters fall for each other out of nowhere can make any romance come across as a Token Romance, and hence what often happens is that the writers start firing every possible drama cannon so as to impress upon the viewers that this is important and they should care. The characters don't merely start dating nor just fall in Love at First Sight; they are thrown into a state of immense amorous passion, starry-eyed, Intertwined Fingers, kissing passionately, and promising each other an eternity of happiness simply Because Destiny Says So.

Characters may be derailed, and competing love interests particularly so; Narmy moments and Relationship Sue transformations may become a frequent sighting; chemistry and interaction are prone to be reduced to the Sickeningly Sweethearts sort if there was any to begin with. In more degenerate cases, the relationship may undergo a malignant mutation into a Romantic Plot Tumor, taking the focus off the more important aspects of the story. Cue one part of the audience sighing happily, since those two were obviously made for each other, and it's about time, while the other part of the audience scratches their heads in bewilderment and disdain, since this "development" just asked for too much Willing Suspension of Disbelief and feels suspiciously like the writers just pulled it straight out of their hindquarters. Arguments may break out regarding how well-foreshadowed and well-handled the whole thing was.

A Last-Minute Hookup can result in this, or serve as damage control. The potential problems are all still there, but at least they're not going to grow out of control throughout the rest of the plot since there's no rest of the plot left. Still, this can make unexpected sequels rather awkward, even assuming that the audience can stomach the original strangulation. If the work is an adaption, it may be an Adaptation-Induced Plot Hole. The couple may have evolved over time at the original work, and the adaption may rush things into the romance, because it's one of the key aspects of the original work and has to be included, no matter what.

May be caused by The Dulcinea Effect. For when the build-up takes place before the series, see New Old Flame. When this happens to minor characters and is less noticeable, it's a case of Pair the Spares. Can crop up when the writers want to quickly counteract Ho Yay, Incest Subtext, or a Relationship Writing Fumble. Often results in an Audience Reaction version of I Can't Believe a Guy Like You Would Notice Me or What Does She See in Him?. Compare Ships That Pass in the Night for fanon couples like this. Compare and contrast Designated Love Interest.

Note: While some of the examples are universally agreed upon, this Audience Reaction can get very subjective due to Ship-to-Ship Combat, Shipping Goggles, or plain disagreements. Keep a few points in mind when editing:

Has absolutely nothing to do with The Red Stapler or String-on-Finger Reminder. If someone literally uses a red string on someone else to make them fall in love with them, it's a Love Potion.

This trope can bring in a major twist or event, so beware of unmarked spoilers!

Alternative Title(s): Suddenly Soulmates, The Love That All Of A Sudden, Ass Pull Romance