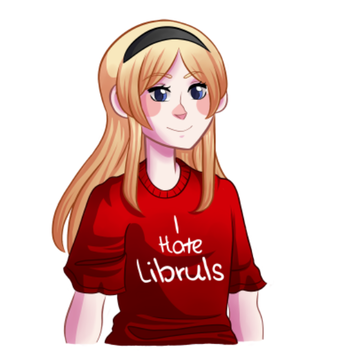 Fan art depiction of Sara Osborne from the blog Fanart of Questionable Fanfiction
So God gave me some power and I fell to sleep. When I woke up I was outside of the Smosh Manshon!
Advertisement:

Supper Smash Bros: Mishonh From God is a fanfic written by PrincessAmerica. Full of misspellings and grammatical errors, it is a homophobic Troll Fic attempting to be the next My Immortal, and it delivers on that promise. It can be found here

. note The fic was taken down from FFN, so AO3 will have to do for now.

The story also had a short lived sequel

As of January 2015, PrincessAmerica has confirmed

that this fic is indeed a Troll Fic in the author's note of her "The Ethical Adventures of GamerGate!" story. Despite this, there's a third story

.note (The co-author on one chapter of the third story is a troper named JennyDoombringer)

In 2018, PrincessAmerica decided to reboot the series in celebration of the upcoming Super Smash Bros. Ultimate and the original fic's sixth anniversary. The reboot (titled Supper Smash Bros: Mishonh From Trump: Teh Fite 2 Saev Amrica) can be found here.

If you just cannot stomach it alone, there's a MST of the first fic here

, done by Weird SSB Fanfics. They plan to do the sequel.

Tropes found in the stories: