Western Animation / The Secret of Anastasia 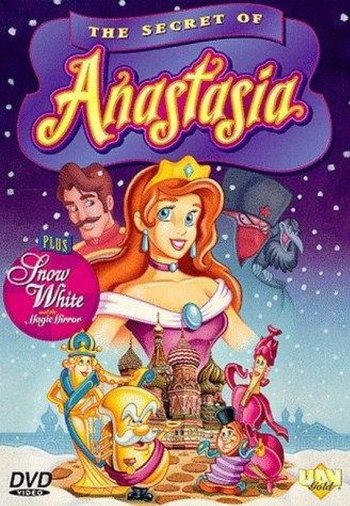 No, not that one.

The Secret of Anastasia is a 1997 Direct to Video Animated Musical by UAV Entertainment. It follows the journey of the lost Russian princess Anastasia to find her family, the Dowager Empress.

Sound familiar? As par the course for UAV, the film is a blatant Mockbuster of Don Bluth's film Anastasia. That being said, it does correct some of the mistakes from Bluth's film (while adding even more of its own). For example, it portrays Anastasia's grandmother as living in her native Denmark after the Revolution, as well as pronouncing Anastasia the Russian way (ah-nah-STAH-see-yah). It also doesn't pretend that the Russian Revolution was caused by an evil sorcerer's spell.