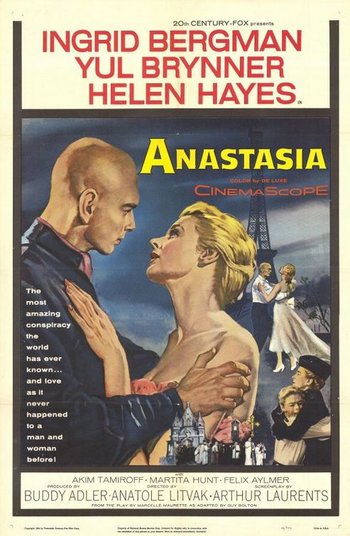 Anastasia is a 1956 film starring Ingrid Bergman, Yul Brynner, and Helen Hayes. It was based on a play of the same name, originally written in French by Marcelle Maurette and adapted to English by Guy Bolton. The movie was directed by Anatole Litvak with a screenplay by Arthur Laurents.

After an Opening Scroll briefly explains the Russian Revolution and the rumored survival of Grand Duchess Anastasia Nikolaevna Romanova, the movie opens in Paris during The Roaring '20s. Exiled White Army general Sergei Bounine (Brynner) is looking for a woman he can pass off as the lost Anastasia. He thinks he's found just the woman in Anna Koreff (Bergman), an amnesic waif who has spent years wandering from madhouse to madhouse, finally ending up in Paris after a long journey which apparently began somewhere in Eastern Europe. Anna at first refuses to participate in Sergei's scheme, but she agrees to go along with it when she's reminded that she has nowhere else to go. Sergei teaches Anna to be ladylike before taking her to meet the Dowager Empress Marie Feodorovna Romanova (Hayes) in Copenhagen. But what if Anna and Sergei have accidentally fallen in love along the way?

The movie marked Ingrid Bergman's Hollywood comeback after she had been virtually blacklisted for her adulterous affair with Roberto Rossellini. She won an Academy Award for her portrayal of Anna. Anastasia was also nominated for the score by Alfred Newman, but it lost to Victor Young's score for Around the World in 80 Days. In 1997, the movie was very loosely remade by Don Bluth as the animated musical fantasy Anastasia.

This film, along with all of the other works based on tales of Anastasia Romanov's survival, became Dated History when discoveries of the Romanov remains in 1991 and 2007 proved conclusively that Anastasia died along with her family in Yekaterinburg in 1918.