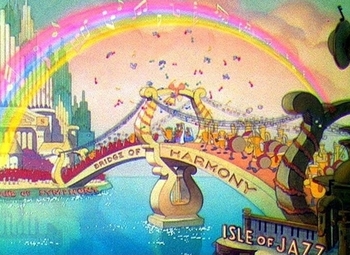 Music Land is an animated short produced by Walt Disney and directed by Wilfred Jackson as part of the Silly Symphonies series of animated shorts. It was released on October 5, 1935. The short can be viewed here

The short is notable for being an early experiment with sound in animation; it gets a lot of mileage out of its music, using snippets from various popular classical, jazz and miscellaneous tunes. It also uses various musical tones in order to express the characters' speech.

Grim Natwick was an animator.

Tropes used by this short: