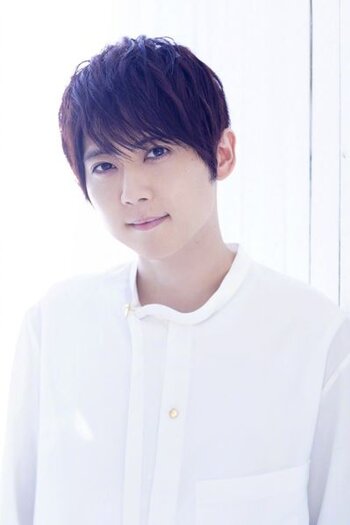 One of the newer seiyuus of the 2010s, Yūki Kaji (born September 3, 1985) burst into the seiyuu industry as Final Fantasy XIII's vengeance-driven Adorably Precocious Child Hope Estheim. He has since voiced a number of prominent male characters (leading to many jokes by his fans and fellow seiyuu about his "main character syndrome"). Infamously was once regarded as a source of X-Pac Heat with a reputation for Wangst due to playing quite a few Scrappies and Base Breaking Characters early in his career, but a series of He Really Can Act roles have since established him as a respectable actor. Kaji sports a very wide vocal range, going all the way from Child-Like Voice to Badass Baritone when need be.

in the 7th and 8th Annual Seiyuu Award.

He also authored a book that tells his life of how he became a seiyuu called "Itsuka Subete ga Kimi no Chikara ni Naru" and has a manga adaptation of the series.

On June 23, 2019, he announced that he married fellow seiyuu, Ayana Taketatsu.

in 2020, where it initially featured classic stories narrated by him and Animal Crossing playthroughs. It has since expanded to include playthroughs of other popular games, videos with fellow seiyuu, actors, and even some of his non-celebrity friends, promotions about his other projects, and many more.