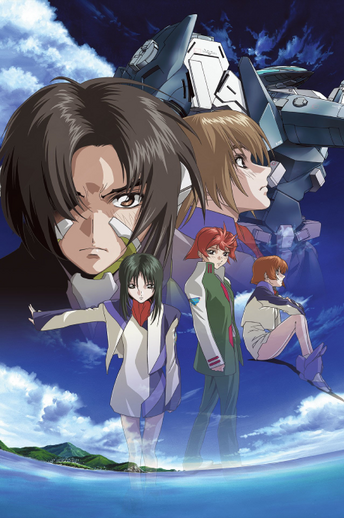 "Are you there?"
Advertisement:

Fafner is a 26-episode long anime produced by Xebec and directed by Nobuyoshi Habara about a lone island, Tatsumiyajima, in a world where aliens called Festum have invaded and subsequently wrecked much of the human population. Major cities and/or countries are gone (naturally, Japan is included), but Tatsumiyajima is left alone... that is, until the Festum come back once more. There're no worries, however; the show's gigantic machines, the Fafners, are more than adequate to kick some golden butt.

Throughout the series, the Fafners' pilots, which are revealed to be specific children on the island, are introduced to aid the protagonist in combat; some blow up, get scrapped, or become inducted into the team. Then the island accidentally makes contact with the U.N., who more or less blackmails them into joining the big war against the Festum (and mainly because the U.N.'s own machines suck to the nth degree).

Fans of Mobile Suit Gundam SEED might note the similar character designs; after all, they share the same designer in that aspect. The Humongous Mecha of the series, however, are anything but Gundam-like, and are more akin to Evangelion. Indeed, the storyline and all material contained in the series itself can be called as such, although their usage, looks, and overall plot point differ by varying degrees.

It also had a 50-minute TV special made for it. Fafner: Right of Left tells the story of how Tatsumiyajima narrowly avoided all-out war with the Festum even before the series began, by splitting off a section of the island as a decoy (with people left behind to steer it around, no less), arming them with cool-looking prototypes and the prototypes of the kids in the main series (all the widdle children around are like that), and generally telling them that their mission, more or less, is one of duty-bound suicide. Expect less of the main series' bittersweet ending than flat-out slaughter... regrettably, not all of the Festum's fault alone.

A theatrical film, Heaven And Earth, premiered on December 25, 2010 and a second season was confirmed under the name Soukyuu no Fafner: Dead Aggressor: Exodus taking place two years after Heaven and Earth. Its first half aired in January of 2015, with the second half airing in October of 2015.

In January 2017 yet another sequel, The Beyond (taking place after Exodus) was announced

. It is a 12 episode anime, though somewhat unique in that rather than airing weekly, the series instead airs 3 episodes all at once in theaters. The first part aired on May 21, 2019. The second and third quarters were respectively aired on November 21, 2019, and November 13, 2020. The last 3 episodes aired on November 5, 2021. On a somber note, this ended up being Xebec's final work before IG Port shuttered it in May 2019.

A one episode Spin-Off, Behind the Line was announced on December 27, 2021.

Alternative Title(s): Fafner, Fafner In The Azure, Soukyuu No Fafner