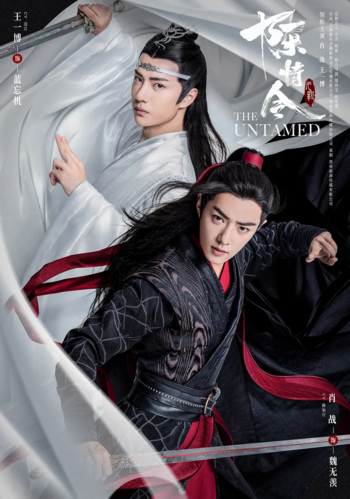 The Untamed (陈情令; Chen Qing Ling) is a web series loosely based on the danmei novel Grandmaster of Demonic Cultivation: Mo Dao Zu Shi by Mo Xiang Tong Xiu. It is directed by Zheng Weiwen and Chen Jialin, and stars idols Xiao Zhan and Wang Yibo as the main leads.

The Untamed aired on Tencent

The series is also available with English subtitles on Youtube

,note Some of the episodes are blocked in certain countries. WeTV

Two web movies serving as "side stories" were also released. The first movie The Living Dead (生魂; Sheng Hun) was released on November 7, 2019, and focuses on Wen Ning and Lan Sizhui after the events of the series finale, where they investigate a murder mystery in a town near Qishan. The second movie Fatal Journey (乱魄; Luan Po) was released on March 26, 2020, and focuses on the lives of Nie Huaisang, Nie Mingjue, and Jin Guangyao prior to Nie Mingjue's death.

A mobile game based on the series is slated for 2022.

The Untamed contains examples of the following tropes: