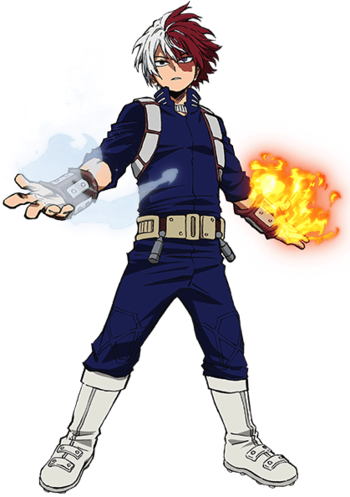 "If you wanna stop this, then stand up! Because I've just got one thing to say to you! Never forget who you want to become!"
A serious, determined, uncommunicative but well-meaning student enrolled by recommendation, he is the son of Endeavor (Enji Todoroki), a famous hero ranking behind only All Might himself. His Quirk is "Half-Cold Half-Hot", which allows him to generate and control large amounts of ice and fire from his right and left sides, respectively. Raised by Endeavor for the sole purpose of surpassing All Might, Todoroki hates how his father only views him as a tool and had originally vowed to become the number one hero without ever using his fire abilities as a form of rebellion.

Due to his rough and isolated upbringing, Shoto is painfully clueless in social situations, which is often a source of comedy in-series.