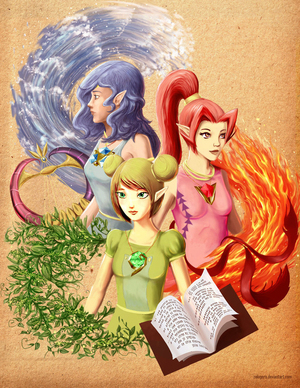 Hair color is an easy visual shorthand for getting information about a character to the audience. Most often, hair color will tell you something about the character's personality, but sometimes, its meaning is something else: this character has an Elemental Power and the hair color to match the element. Quite often, their personality will also be tied to their element and thus their hair color.

This is less common in Live-Action media than in animation, video games, comic books, or manga, for obvious reasons.

Sister trope to Elemental Eye Colors. Subtrope of Elemental Hair Composition, Color-Coded Elements, Colour-Coded for Your Convenience, and Astonishingly Appropriate Appearance. Compare Flaming Hair, which is this trope for fire elemental users taken Up to Eleven.