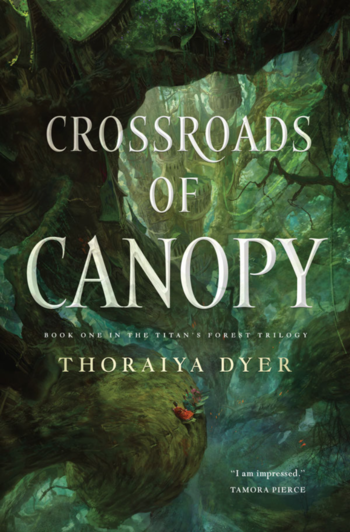 Titan's Forest is a fantasy series written by Thoraiya Dyer. The first book, Crossroads of Canopy, was published in 2017, followed by Echoes of Understorey in 2018 and Tides of the Titans in 2019.
Advertisement:

The world is covered by a vast forest of immense trees, in whose crowns are thirteen kingdoms ruled by thirteen living gods. Here is the sunlit realm of Canopy, where the gods ensure fair weather and bountiful food and maintain a great barrier to keep the people safe from the barbarians and the horrific monsters than haunt the lightless Understory and Floor.

Unar is a young woman serving in the Garden of Audblayin, the goddess of life. Her life is entirely devoted to her deity, and she has few ambitions beyond rising in status in the Garden. When Audblayin dies and her servants set out to search for her reincarnation, Unar becomes convinced that her destiny is to become the reborn deity's new bodyguard. After she is passed over for the search, however, she begins to resort to increasing subterfuge to fulfill this goal, beginning a search that will expose both the cruel underbelly of Canopian society, hidden truths about the nature and history of the Forest and its peoples, and a plot to literally topple the gods' rule.