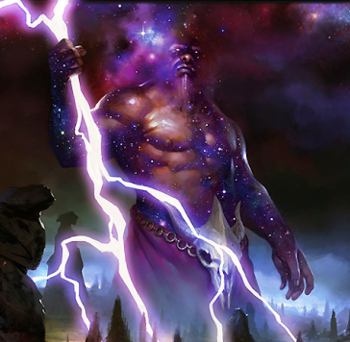 "GOD OF THUN-DER... AND ROCK N' ROLLLLL!''
"The hand of Keranos can be seen in every rumbling storm cloud. Best not to stand where he points."
—Rakleia of Shrine Peak, Magic: The Gathering, "Lightning Strike

Throughout the world there have been many religions and myths regarding gods, monsters and superhuman entities, but this one seems to be really popular. A god of thunder is a Physical God with supreme control over electricity and thunder.

Thunder and lightning have always been associated with the unknowable majesty of the Heavens themselves, so gods of thunder are typically the ones who send out Bolts of Divine Retribution to punish mortals for their hubris and wickedness. Many mythologies portray how they wield it differently, whether they channel it through a sword or a hammer, throw out bolts like spears or shoot them like arrows. Because of this, they are typically portrayed as warriors, if not as outright Berserkers than as protectors of divine justice. Like gods of the sea, thunder gods are often portrayed as having very mercurial and, well, tempestuous personalities. They're often quick to anger and offense, mirroring how storms can seem to boil out of the sky with no warning to unleash devastation and then vanish as quickly as they came.

Compare the War God and the relatively more mundane Shock and Awe and Thunder Beetle. Commonly overlaps with Top God and Everybody Loves Zeus, though it is not mutually exclusive to either. See also Raiju. Can be a source for a Perpetual Storm in some media.

Thor is the Norse God of Thunder, heir to the throne of Asgard and member of the Avengers

Thor is the Norse God of Thunder, heir to the throne of Asgard and member of the Avengers