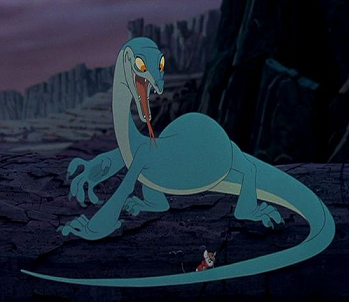 Similar to crocodiles only dwelling on land, monitor lizards are the lizards most likely to be cast as antagonists in animal fiction. They are also common foes in jungle settings.

One reason why monitor lizards get such a bad rap is from their large size and strength, as well as their rather intimidating appearance, since they stand as the largest lizards in the world and are capable of taking down deer and water buffalo. Their habit of flicking out their tongues a lot (they "taste" the air to, well, monitor it), looks like a Maniac Tongue if the lizard is somewhat anthropomorphized.

What also doesn't help their reputation is their diet, as they're often seen as scavengers due to the amount of carrion they eat. In fact, for a long period of time it was assumed that this reason why they had such nasty bites, where the deadly bacteria they picked up from carrion were responsible for taking down prey. However, later studies conducted in the mid-to-late 2000s debunked this theory, with it instead being revealed that monitors are among the few lizard species with a venomous bite. The venom further adds to their villainous reputation, because Poison Is Evil.

In fiction, monitors will usually be a generic kind. If a real-life species does get chosen, it usually be the Komodo dragon; this is partially because Komodos are the largest kind of monitor and look rather intimidating, partially because they're the only species of monitor lizard known to (rarely) kill and eat humans, and partly because it's the only species audiences will be familiar with. Even so, Komodo dragons are a Seldom-Seen Species especially compared to geckos, chameleons, iguanas, and even frilled lizards.

Komodo dragons are generally portrayed as powerful, dangerous Super Persistent Predators; fitting with their intimidating appearance and size. "Lesser" monitors, conversely, are often portrayed as sneaky, thieving slimeballs, with a particular taste for eggs. Obviously this adds to their negative portrayal, since eggs are effectively other animals' kids-to-be.

For series featuring prehistoric life, expect the prehistoric monitor lizard Varanus priscus a.k.a. Megalania, an extinct Australian species that was at least twice the size of the modern Komodo dragon (but in fiction tends to get exaggerated in size and ferocity to dinosaurian proportions). Another common examples are mosasaurs, which are not truly dinosaurs but rather large, aquatic monitor lizards that may fill a role as a Threatening Shark in prehistoric-set works.

Sub-Trope of Reptiles Are Abhorrent. For monitor lizards pretending to be dinosaurs, see Slurpasaur. Contrast Lovable Lizard, for more benign lizards— needless to say, monitor lizards are rarely used for that trope. See also Snakes Are Sinister and Never Smile at a Crocodile for other villainous reptiles, as well as Stock Dinosaurs for their ancient cousins the Mosasaurs.