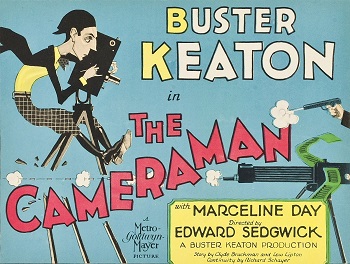 The Cameraman is a 1928 silent film starring Buster Keaton, directed by Edward Sedgwick and an uncredited Keaton.

Buster is a tintype photographer in New York City, who takes portraits of people on the sidewalk. He meets pretty Sally (Marceline Day), an MGM secretary, at a ticker-tape parade where she accompanies a squad of newsreel cameramen. Buster, enchanted with Sally, decides that he will win her heart by becoming a newsreel cameraman too. Comic hijinks ensue as Buster struggles to make it as a cameraman while romancing Sally and fending off Harold (Harold Stagg), a rival MGM cameraman and a rival for Sally's affections.

The Cameraman was the first film Keaton made for MGM after leaving the world of independent filmmaking behind and signing an MGM contract. The decision to become an MGM contract player is commonly regarded as the decisive negative turning point of Keaton's career. Keaton himself called it the worst mistake he ever made, and it is certainly true that his career quickly collapsed not long after this, as MGM utterly failed to manage Keaton's transition to sound. However, The Cameraman is regarded by most critics as a classic that ranks along with all the great movies that Keaton made as an independent filmmaker.