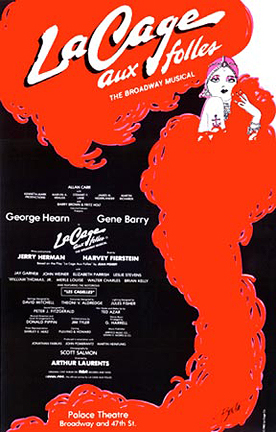 La Romance...
La Spectacle...
"Ladies and Gentlemen, I beg you, open your eyes, for you have arrived...at La Cage aux Folles."
— Georges
Advertisement:

With music and lyrics by Jerry Herman and a book by Harvey Fierstein, La Cage aux Follesnote (pronounced 'la kahj o fol') is a hilarious, touching, thought-provoking, classic story about family and tolerance loved by millions the world over. Originally a French stage play written by Jean Poiret that debuted in 1973, a Franco-Italian movie adaptation was released in 1978 which garnered two sequels and was eventually Americanized as the 1996 hit comedy film, The Birdcage. This entry concerns both the American musical adaptation, which had its first production on Broadway in 1983 as well as the non-musical Franco-Italian movies.

Set in Saint-Tropez, France, the story centers around a gay couple, Georges and Albin. Georges is the proprietor and master of ceremonies of the eponymous, popular dragclub, La Cage aux Folles (literally translated as "The Cage of Mad Women", but 'Folles' is also French LGBT slang equivalent to 'queens') and Albin is the club's headlining star, performing as his celebrated drag alter ego, "Zaza". Their son, Jean-Michel, the result of Georges' one-time heterosexual liaison, then returns from a holiday to inform them about his engagement to his girlfriend, Anne Dindon. Unfortunately, Anne's father happens to be Edouard Dindon, the notoriously homophobic, hyper-conservative Deputy General of the Tradition, Family & Morality Party...who is on his way to meet the potential in-laws. To make things even better, Jean-Michel lied about his fathers telling them Georges is a retired military veteran and married to a woman in the hopes of winning them over.

The show was a massive success on Broadway winning 6 Tony Awards including Best Musical. It is best known for its ground-breaking presentation of a happy, established gay couple, and for its proud message of tolerance (though ironically, for fear of offending any in the audience who disagree with the whole point of the show, the couple never kisses or does anything more). Nevertheless, Georges and Albin are shown to be a generous, loving pair capable of caring for a child and for one another. Having countless revivals over the years, it continues to be an icon in musical theatre (and recently in the West End) with one of it's songs, "I Am What I Am", becoming a rallying cry of the Gay Pride movement.

The play and musical provides examples of the following tropes: