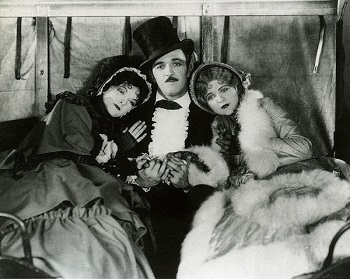 Two beautiful ladies. What to do?
Advertisement:

Hands Up! is a 1926 comedy film directed by Clarence Badger and starring Raymond Griffith.

Griffith plays Jack, a Confederate soldier during The American Civil War who is sent west on an espionage mission. The Union government is deep in debt due to the war effort, but they are anticipating a badly needed deposit of gold from a rich strike in the Nevada mountains. Jack's mission is to gain the confidence of miner Silas Woodcock (Mack Swain, The Gold Rush), while doing whatever he can to keep the gold out of Union hands. Complicating Jack's efforts in Nevada are the Union officer sent to take possession of the gold, as well as Woodcock's two pretty daughters, Alice and Mae, both of whom fall in love with him.

Raymond Griffith was a big star in The Roaring '20s, but he and his films are almost completely forgotten today. Hands Up! has a place in the National Film Registry. Keep Circulating the Tapes, as this film has never been released in an authorized video format.