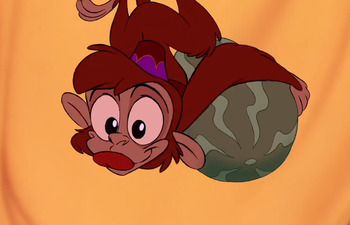 Monkeys are often portrayed in fiction as mischievous little pranksters, who like to steal things (hats seem to be a common target), throw stuff at people (including their own excrement), drop Banana Peels, and otherwise make monkey business. Sometimes, the mischief-making monkey is a Karmic Trickster. Downright malicious examples can overlap with Maniac Monkeys, whereas funny, goofy examples overlap with Silly Simian.

There is some Truth in Television with this, while wild monkeys are rarely intentionally mischievous they can still be serious troublemakers. In Asian countries especially monkeys have a notorious reputation for being obnoxious and thieving vermin, not unlike how many folk in the West regard pigeons.

May be a reason for Hilarity in Zoos. Compare Rascally Raccoon and Screwball Squirrel for other animals stereotyped as troublemakers.

In Rio, the marmosets are all thieves and con artists (within the animal kingdom, at least) as shown in this scene.

In Rio, the marmosets are all thieves and con artists (within the animal kingdom, at least) as shown in this scene.