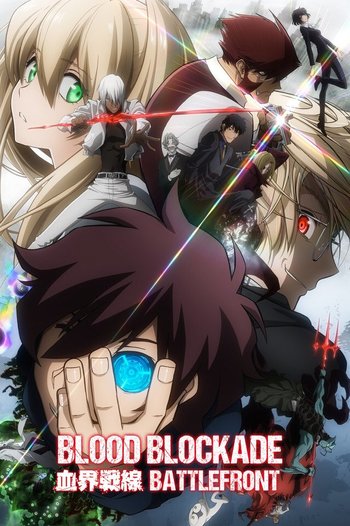 Blood Blockade Battlefront (known in Japanese as Kekkai Sensen or "Bloodline Battlefront") is a manga created by Yasuhiro Nightow, the creator of Trigun and Gungrave. It began serialization in Jump Square in January 2009, later moving to Jump SQ.19 in 2010 where it continued until its conclusion in February 2015. It received an anime adaptation from Studio BONES in Spring 2015.

Three years ago, the barrier between the Beyond and Earth broke down... in New York City. In one night, the city was destroyed and rebuilt, renamed Hellsalem's Lot (according to the characters, or Jerusalem's Lot in the manga). Demons and monsters are now commonplace in city life, and magic has become both a blessing and a burden. In this city where almost literally anything can happen, human life is very difficult.

The story follows the path of Leonardo Watch, The Everyman. Due to an attack from a mysterious being, his sister, Michella, lost her eyesight and he gained the All-Seeing Eyes of God, two glowing blue eyes that allow him to see things that cannot be viewed with normal sight, through any illusions and all obstacles. It also follows the secret society Libra, which protects Hellsalem's Lot from malevolent inhabitants. Leo joins Libra in an attempt to cure his sister, becoming wrapped up in the ensuing barrier war between the vampiric superhumans known as the Blood Breed, and the rest of Hellsalem's Lot. Along the way, Libra fights other criminals such as Femt, the King of Depravity, or other horrific monsters.

Originally, this was a one-shot story called Barrier War (Kekkai Senso) released in 2008, the story taking place in a contemporary city with an emphasis on vampire hunting.

After a long delay, its finale finally aired in October 2015. The anime was hugely popular in Japan, leading to the announcement of a second season which aired in 2017, titled Kekkai Sensen & BEYOND a.k.a Blood Blockade Battlefront and Beyond.

After the original manga ended, a sequel called Blood Blockade Battlefront: Back 2 Back began serialization in Jump SQ.Crown in July 2015, and is still ongoing.