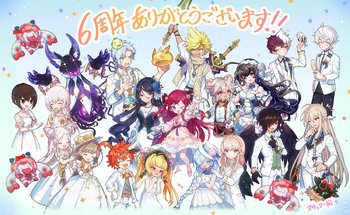 Merc Storia is a Fantasy RPG touch and go game made by Happy Elements, the creator of Ensemble Stars!.

A fantasy story featuring a boy and the water sprite Merc. The boy, Yuu, is a soother, a person capable with the ability of taming monsters. Merc meeting Yuu with the hopes that he could help her recover her memories is what starts the story of Merc Storia.

It is currently only available in Japan. There was once an English version but it had went out of service and had bugs.