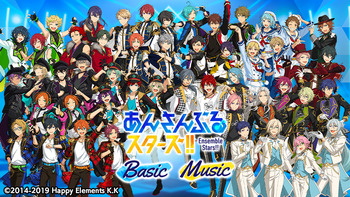 And there are oh so many stars.
Advertisement:

is a touch-and-go, card-collecting game created by Happy Elements of Merc Storia fame, and the younger brother series to Happy Elements' earlier mobile game, Ensemble Girls!. Its main attraction is a Cast Full of Pretty Boys performing various idol activities, with a story involved as background to many of the cast. Despite its colorful art style and setting, the story is much darker than one would initially assume.

The player, a new female student (called Anzu as default, but the player can input their own name as well) in the second year transfers to Yumenosaki Academy, which used to be an all-boys school famous for creating popular performing units, until her transfer to start studying in the producer course. Facing the fact that the school is not what it seems to be, she decides to help a group unit who wanted to rebel against the school's Unit system.

Initially a josei genre (with shounen elements) spin-off story to its now-defunct sister game Ensemble Girls!!, Ensemble Stars! sky-rocketed in popularity and received a number of notable adaptations, as listed under installments. It is currently one of the most popular male-centric idol franchises of The New '10s.

In 2019, Happy Elements announced a new direction for the mobile portion of the franchise: it would be retitled to Ensemble Stars!! and consist of two coexisting games. Along with the classic training game (retitled Ensemble Stars!! Basic in 2020), an additional rhythm spinoff/sequel titled Ensemble Stars!! Music was launched, featuring the boys signed to different talent agencies. Both apps have the same new events, gacha, stories, and characters, but different requirements for obtaining cards.

After years of No Export for You, an official English version of Music was released in June 2022.

Now has a Character page under construction. Please help by moving or adding character tropes there.

IMPORTANT NOTE: As Music has only been recently released in English, please mark spoilers accordingly.

Ensemble Stars! And Its Adaptations

Tropes A-G
Tropes H-M
Tropes N-Z
a 5-star card has been raised to 3%, but it isn't guaranteed to be the card featured in the current scout.