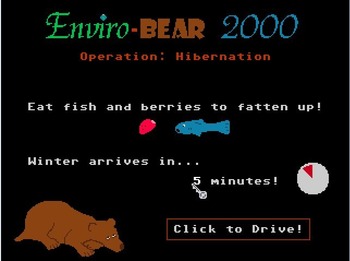 You play the role of an ordinary bear, living a regular ol' habitat...but wait a minute, winter's coming! Naturally, you'd have to get as much nutrients as you can before you hibernate - otherwise you'll have sleep deprivation and a freezing white day on top of that. But, there's only 5 minutes before winter begins...so how can you help the situation?

With a Cool Car, of course.

Grab as much fish and berries as you can before winter comes, as your ride fills up with rocks, pinecones and leaves. Avoid obstacles like bees, trees, and even Artificial Intelligence opponents (and probably a badger), and then find and enter a cave. See how many years you can last before the snow finally gets to you...

Enviro-Bear 2000: Operation: Hibernation is an indie game developed by Crackerblocks (Justin Smith). Needless to say, it's a bear driving simulator.

It was released on May 25th, 2009, and can be freely downloaded on GameJolt here

. Its Android port, Enviro-Bear 2010, can be found on the Google Play Store

The tropers are restless!