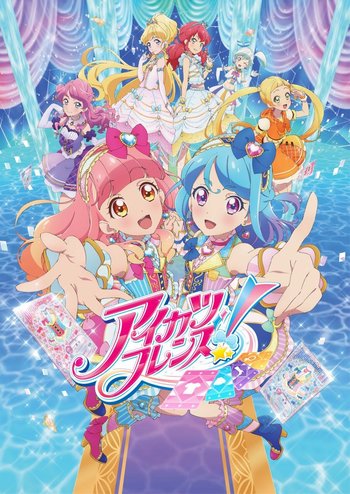 As the third installment in the Aikatsu! franchise, Aikatsu Friends! is the second spinoff/reboot title of the overall series following the heels of Aikatsu Stars!. The series began on April 5, 2018, a week after Stars! concluded its own anime run.

Here, the story follows Aine Yuuki, a girl who is great at making friends and enrolls into Star Harmony Academy's general course. She quickly ends up befriending Mio Minato, the top idol in the school, becomes an idol herself, and starts on her own idol activities.

The series brings back units (called "Friends" here), an element that was largely missing from Stars!, as the main characters each form their own groups, and the protagonist duo is a pair unit.

2019 saw a minor Time Skip for its second season, Kagayaki no Jewel, made to promote the game of the same name. With Aine and friends now in high school, they face all new challenges with a new idol to face, and the ever elusive Jewel Dress.

In October 2019, this series was replaced with the multi-series crossover Aikatsu On Parade.