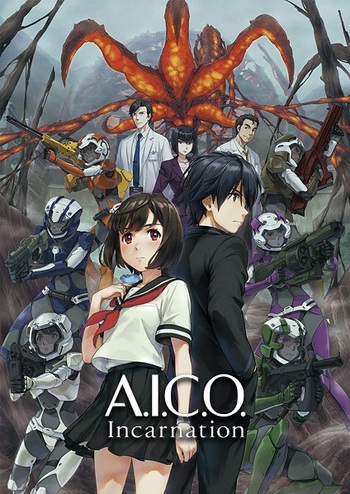 A.I.C.O. Incarnation is an original net animation series. It was created and directed by Kazuya Murata and produced by Studio Bones.
Advertisement:

In the year 2035, the attempt to create an Artificial and Intelligent Cellular Organism went horribly, horribly wrong, causing the Burst, which covered Kurobe Gorge in synthetic organisms called Matter. The area became uninhabitable, and a small industry sprang up of mercenary Divers who venture into the gorge and fight the Matter in order to recover valuable items for rich clients.

Two years after the Burst, teenager Aiko Tachibana has almost completely recovered from a car accident that killed her father and left her wheelchair-bound. On the last day before summer vacation, a new student, Yuya Kanzaki, transfers to her school. Yuya reveals to Aiko that her body is artificial and that her real body is stuck somewhere in Primary Point, the area where the Burst began. He also informs her that if she goes to Primary Point, she can help end the Burst once and for all. Enlisting a team of Divers, Aiko and Yuya head into the gorge.

The series premiered worldwide on March 9, 2018 on Netflix and it consists of 12 episodes.