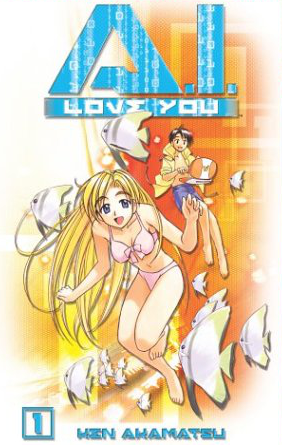 A.I. Love You is a manga series by author Ken Akamatsu, which ran from 1994 to 1997 in Weekly Shonen Magazine. An English translation of the series is published by Tokyopop, and a French one by Pika Editions; the first volume came out in North America and France in February and May 2004 respectively.

It tells the tale of Hitoshi Koube, who is neither academically gifted nor good at sports, so he does not do well at school. His true skill is at programming computers, to the point that he can make self-modifying programs — true artificial intelligence. He has created thirty such programs, and the latest one — named Saati — is so advanced that conversation with her is indistinguishable from a normal girl and, thus, would easily pass the Turing test. So he has an intangible girlfriend. Yay.

Things go kind of sideways (as most series of this type tend to do) when a freak lightning strike causes Saati to materialize into the real world...

The basic plotline is derivative of the Kousuke Fujishima manga Ah! My Goddess, with the AI constructs being analogous to the goddess characters of the earlier manga. The setting also bears similarities to the John Hughes film Weird Science. Both feature male protagonists creating their ideal girlfriends on computers and both girls are brought into the real world via lightning, bearing somewhat superhuman powers. Despite these obvious similarities however, Akamatsu claims not to have seen the film prior to creating the series.