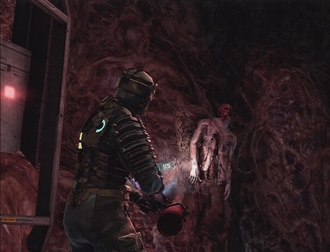 "Like what the place has done with me?"
"What the hell is that? It looks like the ground there is alive..."
— James Raynor, StarCraft
Advertisement:

Usually occurring in sci-fi works, Meat Moss is when an inorganic, usually mechanical, structure is overgrown with a thick fleshy biomass. The origin of this tissue can be the bodies of victims altered by The Virus or a particularly aggressive form of Alien Kudzu, or it could even be the "natural" state of a Living Ship. The end result is always, however, the disturbing architectural counterpart to the Cyborg.

An excellent way of saying "This is The Virus's territory" or "The heroes are on a techno-organic spaceship", though it does raise questions as to how this biomass is sustaining itself, as well as its purpose other than as set decor. This, in turn, however, makes it also an excellent way to demonstrate that you're in an Eldritch Location or some other place where the usual rules of reality don't apply. The Rule of Scary and the Rule of Cool go a long way toward maintaining the suspension of disbelief.

This tends to overlap with Wetware CPU, particularly in the case of the Living Ship variant, in this case the tissue itself being the wetware in question. In more benign settings, may involve a somewhat squicky Brain–Computer Interface. Frequently used for evil settings thanks to one of its parent tropes, Evil Is Visceral. When it's divine punishment, you have the Bloody Bowels of Hell. Sufficient amounts of meat moss can also result in a Womb Level. In the most unsettling and disorienting forms of Organic Technology or Worlds of Chaos, Meat Moss may be intertwined with Alien Geometries.

Compare Festering Fungus, which displays the same traits in vegan form, and Transformation Horror, which can resemble this on a smaller scale, and ultimately lead to this if allowed to progress unchecked. Compare/Contrast Mordor, which may contain this sort of twisted lifeform, or none at all.

A subtrope of Body Horror.