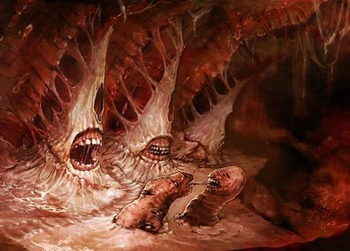 That's a Hell of a mess!

Hell can be depicted in many different ways. From the classic Fire and Brimstone Hell, where sinners burn for eternity, to a more organized structure with different sins punished in different ways, sometimes going all the way to torments personalized to the individual, and sometimes a dark void where nothing exists, as it was portrayed in the actual Bible. Then there's this decidedly squicky version.

This kind of Hell is like being inside a living being, with walls of flesh and structures like organs. This is a fairly recent phenomenon which plays upon the Primal Fear of being eaten and the idea that Evil Is Visceral rather than ancient mythologies, but the idea of the entrance to Hell being an actual mouth that would swallow the damned is very much older than the use of the word "hellmouth" in certain 90's TV shows. (See this Hellmouth

◊ image from The Middle Ages.)