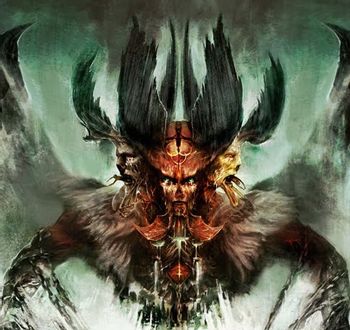 Crowns are cool. So are evil overlords and other powerful creatures of the unknown world. Wouldn't be cool if there was the opportunity to make them even more intimidating and grotesque in front of their enemies?

Well, you can actually make their head look like a giant crown made of bone, flesh, hair or everything that covers their skin. If the actual character is an undead, a lich, a demon or something worth the running for your lives, the result will be a twisted depiction of your stereotypical king. Instead of being a monarch chosen by someone else according to certain laws, this one can't be symbolically dethroned for having their own crown stuck on his skull. If you've got the guts to do it, you'll have either to defeat it or cut those appendages for good. Anyway, the king you will be dealing with may also have elemental powers on his side.

Although many examples concern with kings, female examples can still be found in medias and non-royalty examples can be counted. Related with Cool Crown and usually a marker or Red Right Hand. It may overlap with Spikes of Villainy, Horns of Villainy, if the character is one of the bad guys, and, sometimes, Crown of Horns.