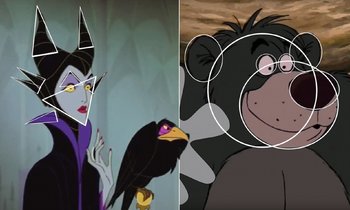 Even if the pitch blackness doesn't give it away, the hard angular and edged design makes Maleficent appear evil, compared to the rounded shapes of the Big Fun Baloo.
Generally speaking, within shape design, round shapes denote calmness, tranquility, protectiveness, nurturing, all of that stuff, while very jagged, sharp shapes tend to denote something that is more aggressive, more prickly, more dangerous.
— TB Skyen, Coding the Robots

Regardless of who your villains are, they are going to be visually at least one of two things: One is Sexy, the other is imposing, and one of (if not the main) way for villains to appear imposing is through involving lots of sharp corners, edges, and geometrical shapes in their visual design — Whether it's their tools, their clothes, their bodies, their faces, their Supervillain Lair, their mooks, or even their entire faction, it seems that soft curves and round shapes are solely the purview of the good guys because villains wouldn't be caught anywhere near them.

There's some psychological basis for this; since the dawn of time, humanity has had to avoid sharp objects as they posed a threat; thorns, sharp rocks, tusks, and more were all capable of piercing or cutting wounds into our soft hides, and as such we have an instinctive aversion towards irregular edges, points, and sharpness all around, especially if they move. Something that villains aspiring to strike fear into the hearts of their enemies will happily use to their advantage.

As such, if a character undergoes an Evil Makeover that is not played strictly for Fanservice, expect it to include lots of visually edgy design — though this is not to say that the tropes are mutually exclusive.

Has no relation to Darker and Edgier despite the description — "edgy" is simply the word used for something with edges, in the same way that something with a lot of spikes is "spiky", and neither is there any relation to Straight Edge Evil — in which the "straight edge" is a shorthand for having no vices.

See also Masculine Lines, Feminine Curves, which uses lines and curves to denote masculinity and femininity instead of good and evil, and contrast with Lantern Jaw of Justice - where straight lines around facial features were used to indicate heroism. Compare Sinister Geometry where the perfection of the geometric shape is offputting.

Aside from his head & eye, everything about this serpent is crooked & incredibly sharp in contrast to a regular serpent. Even his name Crom, means 'bent' or 'crooked' in Irish

Aside from his head & eye, everything about this serpent is crooked & incredibly sharp in contrast to a regular serpent. Even his name Crom, means 'bent' or 'crooked' in Irish