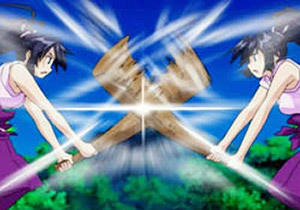 Two identical-appearing combatants attacking in perfect synchronization with identical attacks which will often cancel each other out if the two combatants are fighting each other. A favorite of the Asteroids Monster, expect plenty of Beam-O-War if ki-attacks are in fashion, and Spot the Imposter if one of the two is an Evil Twin.

This trope runs on the idea that since the combatants know everything the other knows they must know what they would do in this situation, up to and including facing a copy of themselves. Thus, they match up.

Compare Juxtaposed Halves Shot (where half of two characters' sides/faces are juxtaposed to or beside each other), Mirrored Confrontation Shot (a similar but conflict-exclusive trope), Bash Brothers, and Mirror Match. May result in a Double Knockout or Mutual Disadvantage. See Ditto Fighter for the fighting game equivalent. Not to be confused with The X-Files and Justice League Unlimited episodes of the same name. The Trope Namer, William Blake's poem "The Tyger", doesn't have anything to do with the trope.